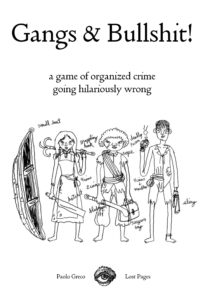 One of the nicest and also to me most intriguing RPG publishers I know these days is Paolo Greco with his Lost Pages. His stuff is whimsy, well made and often bafflingly strange. Where Lamentations of the Flame Princess stuff is heavy-metal gore weird, the Cthonic Codex for example is… odd. Paranoia meets Academentia is a nice explanation for it.

Gangs & Bullshit is the baby he’s carrying now for a while. It is not really a roleplaying game, nor is it a boardgame, and it isn’t „ready“ yet by far. The closest explanation is campaign sandbox with boardgame elements. You do have characters, and you can create them with your favourite (fantasy) game system. But there will also be turns and lengthy meta-discussions where the players plan which single (big) action their characters do each week.

But what is it about, you ask me. Well, the closest literary example would be „The Lies of Locke Lamarra“ — the players have a gang that tries to make money in a city where other gangs do the same. To quote:

The mechanics are mostly improvisation, some random rumour and encounter roles and helping hints on how to determine what other gangs and opponents are doing.

Personally, I think this game is a blast: The Broken Benches sat in their hideout (a leaky loft) and heard that this other gang wants you to buy several boxes of their cookies. Of course, this couldn’t stand, and shortly afterwards, a bunch of girl scouts got what they had coming…

Surprisingly, this is a game that is equally suitable for the planners as well as for those who just barge into a situation to find out what’ll happen next. A good deal of time can be spent studying the city map and planning where to break in, where to set up diversions and how to handle the minotaur-dung cart. But as you do have the backup of the RPG system of your choice, you can jump into the action at any time and see how things actually turn out.

Keep your eyes peeled, and get it as soon as it is available!