I am on Mastodon now

Those who know me, are aware that I am some sort of Hipster. As such, I of course have to be ahead of all the latest trends and topics de jour. In social media, that means that I of course need to have a Mastodon handle. In case you haven’t heard of Mastodon, here’s a short summary:

So, what makes this different than, say Identi​.ca, Diaspora and similar things? For once, it already looks much more polished than Diaspora. And then it also manages to overcome quite a lot of the shortcomings that are inherent to the Twitter-clones:

So, what is it with the three timelines and the federation system? The basic setup is this: You have a home timeline, which shows everything from those folks you actively follow. You can follow users on your own instance, as well as those who are on any instance that is federated with the one you’re on. That basically means everyone, unless their instance is viewed as so toxic and bad that your admin has decided to get rid of them altogether. In effect, the Home timeline is what you’re used from all the other social networks.

On top of that, you have a „Local“ timeline. That list shows all the activity from everyone who is a user on the same instance as you. This immediately shows one reason why it is important to choose the correct instance to have your account in: If the instance you join is full of gaming nerds, you will have a very different experience than if it would be full of artists or political activists.

The third timeline is the Federated one. Here you basically see everyone who isn’t local or in your home stream, but somehow connected to one of those people. Friends of a friend so to speak. The exact rules are a bit more complicated, but that is the gist of it.

I really cannot stress how useful I found these extra two timelines. While I have no idea how many people are on the same instance as I am (octodon.local, chosen because the about page is simply spot on to my worldview.),  it apparently is exactly the right size: The local stream is busy, but not too busy. And as a result, people take the time to chime into conversations there and answer open questions. On other social networks, those questions would probably either not be seen, or drowned in the sea of everything else.

Now, with every new tech project, there are of course immediate philosophical differences: One of them is the use of FollowerBots. Those are bits of software that simply follow every person on a different instance that they learn of, making sure that the activity of those people becomes visible in the instance of that bot. As an end result, the bots aim to change the behaviour of that Federated timeline from showing friends-of-friends only to showing everyone. Personally, I am not yet sure if I like this. The upside is that if this bothers you, you can for example join an instance that blocks those bots.

The other issue seems to revolve around censorship and free speech. My own stance is that you can say what you want, but not everyone is required to listen to you. And the federation system of Mastodon allows for exactly this: Everyone can set up their own instance, and everyone can give being heard a good shot. But if you spout stuff that upsets people, they can make sure that you don’t show up in their timeline.

(You should be aware though, that the whole Mastodon concept is not very privacy-oriented. There are lots of loopholes and pitfalls, and server admins can usually read everything on their instance if they absolutely want to.)

Still, the whole Federation system allows for a wide variety of needs on the whole free-speech-vs-censorship spectrum. And that allowance in turn fosters a discussion about these very things, with the results of that discussion ending up in the code and settings of the various instances. (keep in mind that the whole thing is open source after all!)

I think I’ll use Mastodon for most of my daily status update needs for a week or so now, to see where I end up with this. See the results here: https://octodon.social/@JollyOrc

Published on:10. April 2017 Category: testing Keine Kommentare zu I am on Mastodon now 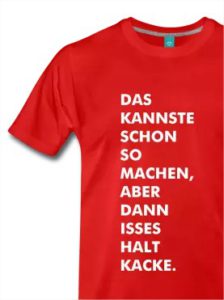 If you have an OKCupid profile, you might want to

Why? Because some ethically challenged and unresponsible searcher named Emil Kirkegaard just released profile data on 70,000 OkCupid users without permission. What is in that list? According to Vox​.com, there are:

Why is this problematic? Personally, I’m not affected. My username isn’t in that list, and even if it were, I wouldn’t be overly concerned: I’m a straight white dude with few secrets, and those that I have wouldn’t threaten my life, my job or my relationship. But I know people who are actually on that list, and who are less than thrilled about the whole thing. Keep in mind that some folks have stalkers, who now have an easily searchable database. And some need to compartmentalize their lives, maybe because of jobs or family or whatever.

And yes, the OKCupid data was sort of semi-public. But it wasn’t in a handy freely searchable database, and it was hard to correlate that data with other sources. Now it may be much easier, creating data leaks and consequences no one could have reckoned with.

But mostly, I cannot understand how a researcher, someone who is supposed to know about data, data correllation and especially about the ethics of this science, how such a person can just willy-nilly publish such intimate data without the express consent of the people involved.

I really hope that the name Emil O. Kirkegaard really gets burned within his scientific community and that anyone who ever considers giving him a grant or research position is aware of this despicable and irresponsible behaviour. Also I hope that OKCupid will sue his ass off.

(alas, as far as I can see, they haven’t put out any message to their users, alerting them of this scraped dataset. Pity.)