Tales from the Loop Playtest 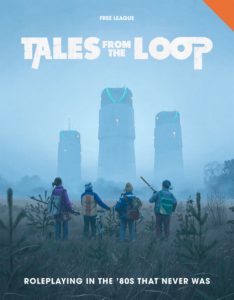 For all of you who live under rocks: Tales from the Loop is a roleplaying game based on the retro-scifi artwork by swedish painter Simon Stålenhag.

The world portrayed are the 80ies we saw when we watched E.T. or, more recently, Stranger Things. As a result, you will be playing teenagers, or rather: Kids, somewhere between 10 and 15 years old.

We got our picks from easily relateable archetypes: The Computer Geek, the Rocker, the Popular Kid, the Hick and of course the Jock. They don’t get any custom skills like you might expect from games that are Powered by the Apocalypse but instead have slightly different sets of background notes and relationships.

The fun part is that the rules really drive home the idea that you’re playing kids. For starters, there are no combat rules at all, a fact that I actually only realized when the game was over and someone else mentioned it. Rather consequently, the kids can’t die either. Damage is caused by pushing ones limit and handled with an abstract set of conditions that are mechanically shed whenever you take a moment of timeout in a safe space.

As a result, you really get thrown into the kids mindset, even though some of the skills seem to be too broad or too narrow in name and definition, with a confusing overlap at some points. But that is not too bad — unlike the pool system: Nothing is more frustrating than throwing buckets of D6 and not getting a single success (which only sixes count as those).

Anyway: We opted for slightly older kids in the 13 to 14 year old range and had a blast. The kids spied on a scientist, camped on an island, played spin-the-bottle, nearly got torpedoed by a submarine and finally had to tell the truth to adults (which was a believably scary thing!)

If you know the teenager books like The Famous Five, TKKG and similar fare, you’ll feel right at home.