If you ever looked at one of these Buzzfeed lists like „10 dark original endings of Disney princesses“ or similar things, you certainly know that european, and especially german fairy tales are dark. Gloomy, doomy, dark. 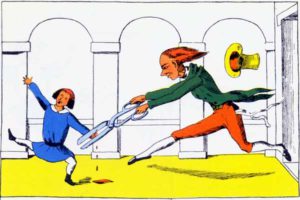 You might know of old-school things like the Struwwelpeter: An educational book that was supposed to scare kids straight, so they won’t suck on thumbs anymore:

Right, stop sucking on that thumb, or some tailor will come and SNIP THEM OFF!

And yes, a lot of the fairy tales end with people being seriously dismembered, tortured or just dead. To be fair though, a bunch of them aren’t actually german.

But also more recent kids books contain, let’s say, disturbing elements. Take Krabat. A story about a boy getting apprenticed at a spooky mill, where the boys learn true black magic, from a miller that serves the devil or at least Death himself!

(unsurprisingly, this book by Ottfried Preussler is purported to be one of Neil Gaimans favourite scary stories for children.)

But Ottfried Preussler also wrote slightly more cheerful things. One beloved work is „The Robber Hotzenplotz". To understand this though, you need to understand who Kasperl is.

Before we got the Muppet show on TV in germany, we had Kasperletheater, the hopelessly german variant of the Punch & Judy show. Instead of Punch, we have Kasperle and he isn’t a violent anti-hero but more of a friendly trickster archetype. As a whole, Kasperletheater is set up to instill kids with a sense of morality and to respect societies norms.

Schoolvisits of the „Polizeikasper“ aren’t uncommon: A friendly police officer comes along with the well-known handpuppets to introduce the kids on the correct ways to brave traffic with their bike.

The Robber Hotzenplotz is such a theatre, put into literary form. The infamous robber with the name „Hotzenplotz“ sets out to steal grannies coffee mill (by accident he kidnaps granny as well) and has to be stopped by Kasperle, by any means necessary!

Such an epic plot needs to be put into a movie. And simple hand puppets won’t do this justice, so.. we need… string puppets!

String puppets shows, all produced by the Augsburger Puppet Box have been a fixture of children’s TV in germany for a few generations now. If a german comedian starts walking funny, as if held upright by strings, this is what they’re referring to.

The Puppenkiste has produced many a beloved story, be it about a freshly hatched dinosaur..

a wish-fulfilling creature that only appears if you stick to a specific plan for 7 days straight..

and.. a small black boy who is best friends with a steam train driver on a tiny island: „Jim Knopf & Lukas der Lokomotivführer“. Here’s the intro, pay attention, there will be a quiz:

As with all the other examples above, the basic appearance is quaint, provincial with a tiny bit of disturbing added in. Nearly all the stories happen in small towns, and everything is of small scale. What makes this noteable, is that the story has been penned by Michael Ende, probably known to you for the Neverending Story, so, yes, this heartbreaker:

But back to more cheerfully Jim Knopf. Knopf means „button“, and he’s named that way because he was constantly ripping his pants, so his foster mother put a button on it, so it was easier to close up the ripped part. Yes, I know, that makes no sense.

This is a vastly more cheerful and optimistic story, even though it begins with the fact that Jim Knopf is an orphan and ends with the discovery of a massive slavery operation. (Run by an ancient dragon, no less. And on the way, we’ll meet the Wild 13, a bunch of pirates, who are actually only a dozen.)

Anyway, you still have that catchy tune from the intro in your head? In case you it didn’t stuck, let me introduce you to „Dolls United“, who sampled it into Eurotrash:

And if that isn’t making you pray for the sweet release of death, here’s the MDR Fernsehballett doing a live performance (the concept of a tv station having their own permanent on-staff ballet troupe is completely normal for germans. Just saying):

(yes, this is blackfacing. In 2012. There is a way to explain that, but it won’t make anyone look actually better, so I won’t even try.)

Instead, I’ll show you a clip from The Show with the Mouse, where they explain why there’s a dent in every sausage: