There’ve been a few „this was terrifying, why?!“ comments in the side channels to the last blogpost. Let me explain a bit, why Terrifying German Culture Hour exists: 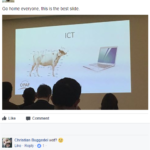 I’m a nerd. And so is the girlfriend. Being nerds, our interests are often… eclectic. And cynical — as anyone who ever worked with computers, we sometimes want to retire to a farm, so, when the conversation shown at the left side happened, there was only one possible answer:

One-up her and assert dominance! So, I posted this:

Which is, despite what you might think, actually sung in german. And as I did that on her Facebook timeline, innocent bystanders got blindsided, and demanded an explanation. I finally found the relevant Facebook post again, so I can reconstruct this explanation here:

Have you seen „A most wanted Man“? You should, it’s a great movie. If you’ve seen it, there’s a german bureaucrat in there, who is played by Herbert Grönemeyer. You can briefly see him in this YouTube clip. He’s the chap on the left:

Kinda unimpressive, right? But the fact that the video headline mentions his name and the word „comeback“ should tell you that he might be a bit of a thing here. And yes, he is. Maybe you do remember Das Boot? He was in there too, as a reminder, here he is:

So. Grönemeyer, actor, that’s it, right?

Grönemeyer is a german national treasure, and not because of his acting (which is top notch), but for his music, dummy! Us germans, we love Herbert for his music, here’s his hit:

And no, this is not something weird and one-hit wonder by some random actor-trying-musician. Herbert fills stadiums!

And he stayed active as a musician quite a while, making videos that put Werner Herzog to shame:

If there is any doubt in your mind, he is so beloved, he got to sing the official soccer world cup song!

Should you still be unconvinced, rest assured, he is so famous, there are cover songs of his work:

And next time, I’ll do the Die Ärzte thing, promise.