We played Tales from the Loop

This weekend, I invited a few friends to playtest Tales from the Loop with me. I already had a first exposure to the game during the annual new years gaming bash at Spielefeld, but that was with the Alpha version, and as a player. This time I was the referee, which always is wholly different experience.

Despite having set the date two weeks in advance, I actually did only minimal preparation: One skim-read of the whole rulebook, one reading of the Mystery and.. 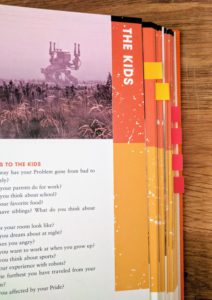 The only extra mile I went was adding small post-it bookmarks to the rulebook, so I could quickly find relevant sections during play.

(Really, I cannot recommend these things enough. Colour-coding is quite enough, no need to name them. In this case, yellow is rules and red is the Mystery. And that is really one of my main gripes with the Rulebook: The really awesome pictures are too scattered, and not easy to find when you want to show something to the players. Guess I’ll need another set of bookmarks for that.)

What really hooked me as a Gamemaster were the tenets of the game. First there are three that set the tone of the setting:

Keeping to these tenets ensures that the Mystery will feel exciting, will give the Kids a reason to investigate and get into danger. After all, adults are no help, and everything is better than this boring everyday life.

And then, this is how you should play the game:

This lets the players know what is expected of them, how things will flow, and what kind of risks they can take.

Most of the players immediately got into the rules of the kids, enjoying the hot summer in sweden. They swam in the sea, agonized over the harsh decisions made by their parents („take your little brother with you!“) and generally had fun.

(By the way: It does help if your players are old enough to remember the 80ies. One of mine isn’t, and occasionally had to be reminded on what already existed and what didn’t.)

The Mystery itself was taken directly from the Rulebook, „Summer Break and Killer Birds“, and it went, as far as I am concerned really well. It seems quite linear at first glance, but it actually is akin to a sandbox: There are a few locations and NPCs, as well as a countdown of events that will happen if the kids don’t intervene. The NPCs and locations contain pointers to one or more others. If the kids follow these pointers they will invariably end up at the showdown, but it doesn’t feel scripted, and there are many different possible paths and support for a lot of freewheeling in between.

My other gripe with the rules is the Showdown / Extended Trouble concept. It is very similar to the Wrap-Up in Leverage, but Tales from the Loop isn’t as meta as Leverage, so it the Extended Trouble sticks out a bit mechanically. The general idea is that the Gamemaster sets a threat level and then all the kids have to roll a skill check — if the total number of sixes is equal to or higher than that threat level, they win. What exactly they roll for is determined by the narration, and then the die rolls tell you how exactly they won (or lost).

It works, but you move a bit out of the viewpoint of the kids doing it, which is a shame. Still, it does work, and the resulting showdown felt rewarding enough. As rewarding as the other half of the ending was frustrating to them: In the end believed the kids anything, and instead of being lauded as heroes, they had to evade a severe scolding by several policemen!

I’m looking forward to the next session („Grown-up Attraction“) and already have made some notes on what to improve: